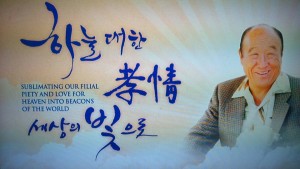 The observance of the fourth memorial of the Seonghwa of Rev. Sun Myung Moon, founder of the Family Federation for World Peace and Unification (herein after referred to as FFWPU) took place on August 18 (July 17 by lunar calendar) at 9:30 AM at the Cheongshim Peace World Center in Gapyeong-gun Gyeonggi-do. With “Festival to Commemorate the 4th Anniversary of the Universal Seonghwa of Sun Myung Moon, the True Parent of Heaven, Earth and Humankind” as its official title, “Become the light of the world through a filial heart for Heaven,” as it’s the subject, around thirty thousand participants attended.

Originally, Rev. Moon guided the meaning of “Seonghwa” as “the moment we enter the spirit world should be a time that we enter a world of joy and victory with the fruits born of our lives on earth.” Therefore, the ceremony was held to unite and harmonize the people. This anniversary commemoration was held as celebration to light the world through the peace ideology centered on Rev. Sun Myung Moon and Dr. Hak Ja Han Moon’s tradition of filial piety toward God, by inheriting the culture of “filial duty” to spread their life works to the world.

Through her main address, Dr. Hak Ja Han Moon said, “We designated the world into 13 regions based on language. We are striving to establish the world peace through national and tribal level messiahship. The International Association of Parliamentarians for Peace was launched last February. Then the International Association of Parliamentarians for Peace, Asia-Oceania Region was launched in July in Nepal, and the West and Central-African Region was launched in August in Burkina Faso. At the same time, Peace Road 2016 was successfully held within 140 countries. This will be continued until its launching in Washington, D.C. in December. Today, 1,200 2nd and 3rd generation members performed beautifully on the stage. They are our future leaders. Even though they use diverse languages and live in different environments, they can unite as one. I wish for this to be a time to determine and aspire to establish God’s dream of ‘One Family Under God’ on this 4th Anniversary of the Universal Seonghwa of Sun Myung Moon.”

Part 1 of the commemoration ceremony began with FFWPU-Korea President Kyeung-Seuk Ryu gave the opening announcement. Then Chairman Yong-Cheon Song of the National Blessed Families’ Association in Japan offered a report to Heaven. Then, a commemorative address was given by Sun Jin Moon, President of FFWPU International Headquarters. Afterwards, Special Songs of Praise were performed by a Joint Choir, followed by a Commemorative Video, “Become the light of the world through a filial heart for Heaven.” After the special performances, following a floral tribute by Dr. Hak Ja Han Moon, she gave her main address. 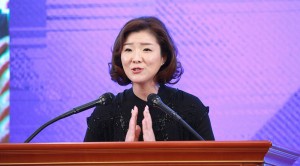 In her commemorative address, Sun Jin Moon, President of FFWPU International Headquarters said, “When I think of my father, Rev. Sun Myung Moon, the image that is forever emblazoned in my mind is one of an indomitable force of True Love. He crossed every border and boundary with principled compassion, generosity and an unchanging commitment to God’s Will. Nothing could stop him from practicing True Love. For the past four years since my father’s ascension, my mother, Dr. Hak Ja Han Moon, has worked tirelessly to carry forward my father’s dream. This is no longer just a dream; it is emerging as a glorious reality. The seeds planted over the past decades are now bearing fruit. His legacy remains alive forever as long as we practice true love and come together as one family under our Heavenly Parent.”

In part 2, there were cultural arts performances by entertainers from the United States, Japan, Korea, the Apple Heaven Band, then the “Food is Love” Bibimbap Festival (Korean mixed rice). The event concluded with the Chair of FFWPU North America Dr. Ki Hoon Kim’s three cheers of Eog Mansei. In part 3, there were cultural performances by entertainers from Latin America, Asia, West Africa, China, Europe, the Little Angels, Korean Singer, Insooni and Cho Hang Jo. Then the festivities concluded with a finale chorus.

Rev. Moon, born in Jeongju, Pyeonganbuk-do on January 6, 1920 (by the lunar calendar), ascended on September 3, 2012 (July 17 by the lunar calendar). Rev. Moon’s Seonghwa Ceremony was conducted on the 13th day from his ascendance with 250,000 visitors from around the world coming to Korea to pay their respects. Rev. Moon founded the Holy Spirit Association for the Unification of World Christianity (HSA-UWC) in 1954, and raised it up as a global religious organization with missionary dispensations in 194 nations. Rev. Moon devoted his entire life toward the reconciliation of world peace and religion, as well as the salvation of humankind.

The Fourth Anniversary of the Universal Seonghwa of Sun Myung Moon (Cheong Shim Peace World Center) events included “DMZ Peace Road to Promote Understanding on the Uni­cation of Korea,” which was attended by representatives from 63 countries, totaling 1,200 participants, Peace Road 2016 in Korea, University Students‘ International Symposium to Promote the Unifi­cation of the Korean Peninsula and World Peace, Religions Peace Seminar, Inaugural Assembly of the Cheon Il Guk Academy of Arts and Sciences and the Multicultural Peace Festival 2016, etc.

Upon the foundation of offering the three-year mourning period, according to God’s Will, after Rev. Sun Myung Moon’s Seonghwa on September 3, 2012 (July 17 by the lunar calendar), the FFWPU is strengthening the unity and harmony of Unificationist families all over the world, who are realizing the ideal of “One Family Under God,” which is the ultimate goal of God’s providence until the year 2020, which will also mark the 100th anniversary of Rev. Moon’s birth. The FFWPU is also spreading the message of hope through the “FORGIVE, LOVE, UNITE” campaign by highlighting the courses of Rev. Sun Myung Moon and Dr. Hak Ja Han Moon’s life works and achievements toward the peace movements, through which they have dedicated their lives for the sake of realizing world peace and human welfare, to the people worldwide who are suffering from national, religious, racial, cultural conflicts and environmental issues.