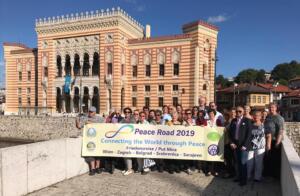 Peace Road to the Balkans

The Vienna-based Bosnian women’s’ group “Women’s’ Forum Mimose”, together with UPF, WFWP and FFWPU Austria went on a peace road by bus through Croatia, Serbia and Bosnia-Hercegovina. They covered 2000 km altogether.

The purpose of the road was for the Bosnian ladies who have been living in Austria since they fled the war in 1992, to convey something from the history of their country, especially about the Balkan wars 1992-1995, and to strengthen the reconciliation process between the nations and the religions on the Balkans.

The road started in Vienna on 6th September early in the morning.  The first stop was in Zagreb, Croatia. After visiting the Neo-gothic cathedral and walking through the historic centre, we could meet Ambassadors of Peace over lunch who had been invited by the national representative Mrs Ji Suk Baek.

Among the VIPs were Mr. Slaven Dobrovic, former government minister for environment and energy, Mrs Ermina Lekaj Prljaska, an active member of the Croatian parliament, Zorica Greguric, who worked as a volunteer nurse during the Balkan war, and a Nigerian princess.

From Croatia, we headed towards Bosnia-Hercegovina. We spent the first night in the city of Orasje, where we met the women’s’ group “Orasje”, women with whom WFWP Austria will keep in further contact.

We also had the chance to meet Father Marko Orsolic from the Franciscan order, one of the pioneers of the interreligious dialogue in Bosnia, who founded the Internacionaln multireligion centar (IMIC) and also to the BEMIC (Belgrade International and multireligious Centre in Belgrade).

The next stop was Belgrade, Serbia’s capital. Slobodan Randjelovic, UPF and FFWPU representative of Belgrade, organized a visit to the Tesla museum, followed by a walk through the inner city to the Belgrade fortress from which we had a wonderful view on the confluence of the Danube and the Sava. Over dinner, we could meet the WFWP representative of Serbia and other Peace ambassadors: Mrs Slavica Putnik and her colleague, both from the Belgrade City Hall, and Mrs Randjelovic, mother of Slobodan, who is working for WFWP in Belgrade. Also a representative from BEMIC (Belgrade international and multireligious centre) which was founded by Fra Orsolic, joined us at our dinner table and we could have a very interesting talk.

Our main destination was the war memorial site in Srebrenica, Bosnia, where in 1995, 7000 Muslim men and boys were massacred by the Serbian-Bosnian army. We visited the graveyard and a hall in which a war survivor told his experiences of the war and how he could survive. What moved us deeply was that he doesn’t hold hatred in his heart but tries hard to forgive and reconcile.
We also could meet the women’s’ group “Mothers of Srebrenica” who shared their experiences with us. Their main goal is to help people overcome hatred and prejudices.  Not hatred, but mercy, compassion and pity towards the enemies, this is what they want to teach the people. 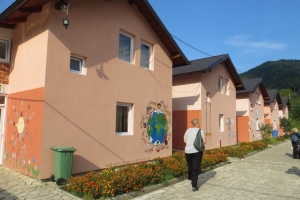 After praying at these sad places, we visited the “Emmaus” community, a centre for orphan children, a beacon of hope in this sad environment.  The International Forum of Solidarity-Emmaus‘ “was founded by Abbè Pierre from France, and one of its youth camps is functioning in Srebrenica since 2007.

Our last stop was Sarajevo, Bosnia-Hercegovina’s capital. During our walk through the inner city, we could see places of worship for Muslims, Christians and Jews. Mosques, Serbian-orthodox and Catholic churches, as well as a Jewish temple, were within walking distances, and we understood why Sarajevo is called the “Jerusalem of the Balkans”.

For the Austrian participants of the trip, it was of special interest to see the site where the heir of the Monarch of the Austrian-Hungarian Empire, Franz-Ferdinand and his wife Sophie were shot dead on June 28, 1914, which caused the break out of World War I.

We also could admire the city hall which was destroyed during the siege of Sarajevo in 1992. In 1996-97 the building was restored with international help.

We were deeply moved by all the impressions of this journey which one cannot get by reading books alone. Our group consisted of Bosnian women who had fled the war in 1992, some of their Austrian friends, and members of the Austrian UPF, FFWPU and WFWP. The interaction of these different groups itself was fruitful and productive and opened ways to further cooperation.

The banner which we used for our group photographs, was greatly appreciated by everyone because it demonstrated our desire to contribute to the peacebuilding on the Balkans.

This kind of peace journey can be organized everywhere. It is a good way for people to get to know UPF and WFWP. In all these places people heard the name of Universal Peace Federation and became familiar with its logo. A radio station in Orasje reported about our visit and our peace road. In Vienna, the newspaper KOSMO wrote about our peace journey as well.

KOSMO is an Austrian monthly magazine for Austro-Bosniakians, Croatians, Montenegrinians and Serbs. It exists since 2009.